Tony Romo Net Worth and Salary: Tony Romo is a retired American football player who has a net worth of $70 million. Although he has also been called a “genius commentator” for his work in the broadcasting world, Romo is probably best known for being the former quarterback of the Dallas Cowboys. Romo began his football career as a holder before becoming the starting QB for the Cowboys in 2006. He then became the backbone of the Cowboys, leading them to an excellent run of solid results over the next few years.

During his time in Dallas, Romo set a number of records. These include most passing touchdowns, most passing yards, most games with at least 300 passing yards, and most games with three or more touchdown passes. Throughout his career, Tony also maintained an extremely high passer rating. That being said, Tony attracted criticism for his failure to lead the Cowboys past the divisional rounds in the postseason, and he had a tendency to lose playoff games. With a passer rating of 97.1, he holds the highest rating among all quarterbacks not to reach the Super Bowl, the highest among all retired players, and the fourth-highest in history.

Early Life: Antonio Ramiro Romo was born on April 21st of 1980 in San Diego, California. Raised as a “Navy brat,” Tony was born in San Diego because his father was stationed at the Naval Base there. The family then relocated to Burlington, Wisconsin, where his father became a carpenter and construction worker. During his childhood, Tony fell in love with baseball and became part of the Little League All-Star team.

Romo’s football journey began in high school. After becoming the starting quarterback for the team, Tony received several honors. During this period, he also played basketball, tennis, and golf for his high school before graduating in 1998. Romo attended Eastern Illinois University and played for the NCAA Division I-AA Panthers. He immediately became an efficient quarterback at the college level, and he led the league for passing efficiency. He finished his college football days with a number of honors, including OVC Player of the Year and All-America honors.

NFL Career: Tony Romo’s NFL career started slow, as he was undrafted in 2003. However, it was clear that the Cowboys wanted him, and they managed to sign him as an undrafted rookie despite competition from the Broncos. He started as their third-choice quarterback, and it was only due to Quincy Carter’s substance abuse controversy that he avoided being released. In 2004 and 2005, Romo mostly played not as a quarterback, but as holder for placekicks. However, a bright moment came in 2004 when he rushed for the winning touchdown against the Oakland Raiders.

Over the next ten seasons, Romo would continue to play well and receive praise from multiple sources. His performances allowed him to sign brand endorsements deals, and one of the most notable examples came in 2008 with a 5-year, $10-million deal with the brand Starter. He suffered a number of injuries during this period, such as broken ribs, broken clavicles, punctured lungs, herniated discs, and more. Despite criticisms of his playoff form, Romo signed another 6-year contract extension with the Cowboys in 2013 worth $108 million. In 2017, he retired from the NFL at the age of 37. 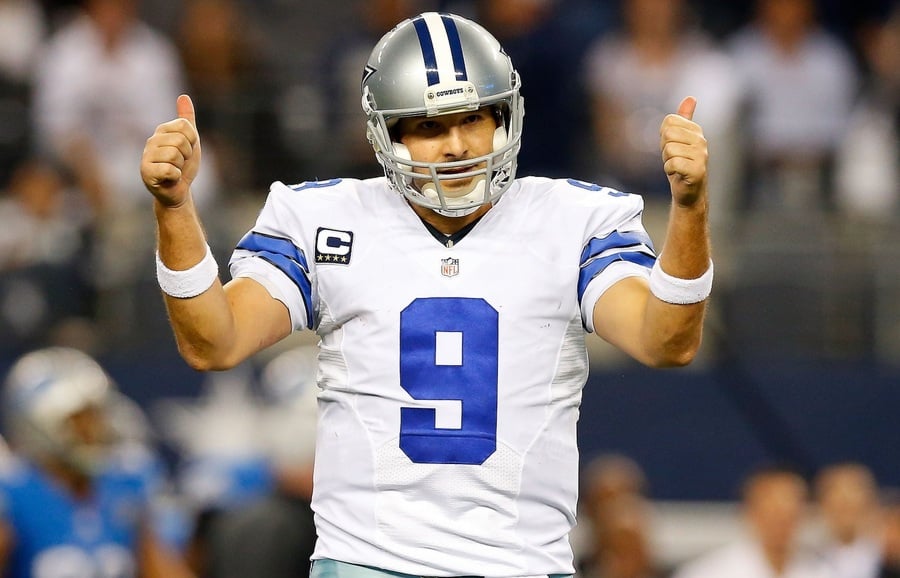 Broadcasting Career: Although many observers questioned Tony Romo’s almost instantaneous ascent to the position of lead color analyst for NFL broadcasts at CBS Sports, he quickly proved his worth. By 2017, he was winning widespread critical praise for his incredible ability to read and predict plays before they happened. Not only did Tony predict plays with exceptional accuracy, but he also connected with audiences in a way that his predecessors hadn’t done.

Relationships: Romo was famous for his relationship with Jessica Simpson, which began in 2007. They broke up after two years. In 2011, Tony married Candice Crawford, a former Miss Missouri and a journalist. They had dated since 2009. Over the course of their relationship, they have had three children.

NFL Salary: In terms of his salary, Tony Romo is a true “rags to riches” story. He was undrafted and earned just $10,000 as a free agent from the Cowboys in 2003. Tony would eventually go on to earn nearly $130 million in salary during his time in the NFL. That’s $40 million more than any other undrafted free agent.

Broadcasting Salary: After retiring from the league, Tony was hired as an NFL analyst for CBS. He earns $4 million per year for his analyst duties. In January of 2020, it was rumored that Tony was switching from CBS to ESPN in a deal that would make him the highest-paid sports broadcaster of all time. According to reports, this constituted a potential annual salary of $14-15 million. Previously, Romo had earned $12 million over his three-year CBS contract. In February of 2020, Tony signed a $100-million contract to stay at CBS, dispelling the rumors that he would move to ESPN. The deal involved a salary of $17 million per year, which makes him the highest-paid sportscaster in history by a longshot.

Real Estate: Way back in 2008, it was reported that Tony Romo had purchased a rather modest home in Valley Ranch, Irving, Texas. He paid just $699,000 for the house, which is painted in all black and white colors. Due to lackluster features like black tile floors and questionable decor choices, it was widely-assumed that this purchase represented a long-term investment rather than an actual living space for the NFL star. In 2016, he sold the 5,551-square-foot home for $1.05 million, earning a significant return on his initial investment.