Ray Lewis Net Worth and Salary: Ray Lewis is a retired American football linebacker who has a net worth of $35 million dollars. He spent his entire 17-year football career playing for the Baltimore Ravens of the NFL. During his career he earned around $95 million in salary alone.

Early Life: Raymond Anthony Lewis Jr. was born in Bartow, Florida, on May 15, 1975. He was a member of the football team at Kathleen High School in Lakeland—he was actually an All-American linebacker on the team. In addition to football, Lewis also wrestled during high school. His younger brother, Keon Lattimore, also played football; he is a former running back for the University of Maryland. While Lewis was growing up, his father was absent from his life most of the time. However, it is likely that Lewis got at least some of his athletic talent from his father, as his father was a record-setting high school wrestler in his youth.

College Career: After high school, Lewis enrolled as a student at the University of Miami, where he played for the school’s Miami Hurricanes football team. As a freshman, he was a starter in five games, compiling 81 tackles, two sacks, and four pass deflections during that first year. Thanks to his top notch performance, Lewis was named to the freshman All-American team. Then, his sophomore year, he continued to perform well, and earned first-team All-American and All-Big East honors. His junior year continued the trend of him performing well—he was named to the All-America and All-Big East teams again, and even was named the runner-up for the Butkus Award, which is an award given to the top linebacker in college football. His finished his junior season with stellar statistics, including 160 tackles, two sacks, two interceptions, a forced fumble, and one touchdown. As interest built up around Lewis and his future career, he actually decided to forgo his final season of college football eligibility, and instead entered the 1996 NFL draft.

Professional Career: In the 1996 NFL draft, the Baltimore Ravens selected Lewis 26th overall during the first round of the draft. The Ravens had just been established, and the 1996 season was going to be their inaugural season. As such, Lewis was actually the second ever draft pick by the Ravens, after offensive tackle Jonathan Ogden, who was selected 4th overall in the 1996 draft.

His first professional game was against the Oakland Raiders, and he helped lead the Ravens to victory. His performance during the game, which featured seven tackles and one interception, earned his the title of AFC Defensive Player of the Week. At the end of his rookie NFL season, he was named to USA Today’s All-Rookie team. During his second professional season, the 1997 season, Lewis earned his way onto his first-ever Pro Bowl, after recording a career high of 184 tackles. He made his second appearance at the Pro Bowl during the 1998 season thanks to his performance, which featured 120 tackles, three sacks, two interceptions, and seven pass deflections.

Lewis continued to excel in his professional football career. In total, he earned 13 trips to the Pro Bowl, and was named to the NFL’s All Decade (2000s) team. In 2000 and 2003, the league named Lewis its Defensive Player of the Year—he is just the sixth player in history to win that award multiple times. Furthermore, Lewis was a member of the Ravens during the team’s Super Bowl victories in 2000 and 2013. He retired from professional football after the 2012 season.

Other Work: In 2015, Lewis published is autobiography, “I Feel Like Going On: Life, Game, and Glory”. Lewis opened his own restaurant, the Ray Lewis Full Moon Bar-B-Que, in Baltimore, Maryland, in 2005. The establishment remained open until 2008. He has also appeared on television, first on ESPN as a contributor for the network’s NFL coverage from 2013 to 2016, and then later with the channel Fox Sports 1 beginning in 2017. 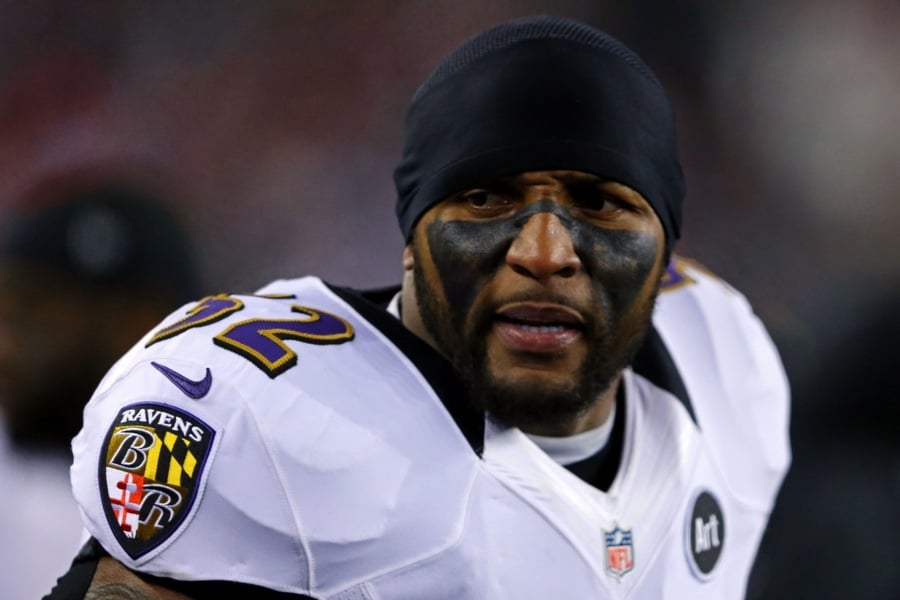 Legal Issues and Murder Trial: He is arguably just as well known (and infamous) for his legal troubles in January of 2000 when a fight broke out between Lewis and his companions and another group of people, resulting in the stabbing deaths of Jacinth Baker and Richard Lollar. Lewis and two companions, Reginald Oakley and Joseph Sweeting, were questioned by Atlanta, Georgia police and 11 days later the three men were indicted on murder and aggravated-assault charges. The white suit Lewis was wearing the night of the killings was never found and District Attorney Paul Howard alleged the blood-stained suit was dumped in a garbage bin outside a fast food restaurant. Victim Jacinth Baker’s blood was found inside Ray Lewis’s limousine. Two weeks into the trial Lewis’s attorneys, Don Samuel and Ed Garland, negotiated a plea agreement with the District Attorney within which the murder charges against Ray Lewis were dismissed in exchange for his testimony against Oakley and Sweeting and his guilty plea to a misdemeanor charge of obstruction of justice. Much controversy still surrounds Lewis, as the public has been vocal about its disgust toward the notion of revering a man many consider a “thug” who turned his friends in to save himself.

Personal Life: Lewis has a total of six children—four sons and two daughters. His sons Ray Lewis III and Rayshad Lewis both followed in their father’s footsteps and also played football at the collegiate level. Lewis is a devout and vocal Christian—his faith was even featured as the cover story in a 2006 issue of the Sports Illustrated magazine. After leaving college early to enter the NFL draft, Lewis later returned to school and earned his undergraduate degree in 2004 at the University of Maryland University College.