Drake Net Worth 2020: Drake is a Canadian-born actor, producer and rapper who has a net worth of $180 million dollars. Drake is consistently one of the highest-paid entertainers in the world. Prior to becoming a massive rap super star, Drake was a child actor who appeared on the Canadian teen-drama Degrassi: The Next Generation. Since first gaining mainstream success, Drake has earned more than $430 million in his career before taxes and lifestyle costs.

Early Life: Aubrey Drake Graham on October 24, 1986 in Toronto, Canada. Drake’s father Dennis worked as a drummer who played with musicians like Jerry Lee Lewis during his career. Drake’s mother Sandra, aka Sandi, worked as an English teacher and florist. Drake attended a Jewish day school and had a formal Bar Mitzvah celebration.

Sandi and Dennis divorced when Aubrey was five. His father subsequently moved to Memphis where he ultimately ended up being arrested and incarcerated for several years on drug charges. Aubrey remained with his mother in Toronto though he would visit his father in Memphis every summer (when his father was not incarcerated). Drake would later describe Dennis as being absent during his childhood, claims Dennis has vehemently denied and asserted were embellished to sell records.

From sixth grade on, Drake and his mom lived in the bottom half of a two story town home in an affluent suburb called Forest Hill. His mother lived on the street-level floor, Drake lived in the basement. They were not rich, in fact money was very tight.

While attending Forest Hill Collegiate Institute, Drake found an affinity for acting and singing. He later attended Vaughan Road Academy where he was bullied for his bi-racial and religious background. He dropped out for a time, but did eventually graduate in 2012.

Degrassi: When he was 15, a childhood friend’s father – an acting agent – helped Drake land a role on the long-running Canadian teen drama television show “Degrassi: The Next Generation”. On the show he played Jimmy Brooks, a basketball star who became disabled after being shot by a classmate. He was a cast member for seasons 1 through 7, with guest appearances in 2008.

While Drake was appearing on Degrassi, his mother became ill and could not work. His Degrassi paychecks were their only income for several years. At the time he was earning $50,000 per year in salary from the show. That’s roughly $2000 per month after taxes. He would later describe this time period as follows:

“My mother was very sick. We were very poor, like broke. The only money I had coming in was off of Canadian TV.”

Music Career: Inspired by rap icons like Jay-Z who earned record deals after becoming successful as independent artists, Aubrey – who by now was going by his middle name “Drake” as his stage name – began releasing mixtapes in 2006.

In February 2005 he released his first mixtape “Room for Improvement” via his website and official MySpace page. He managed to sell more than 6,000 copies directly. He released his second mixtape, “Comeback Season”, the following year. He released the mixtape through his own recently-launched label October’s Very Own (aka OVO Records). This mixtape featured what became a hit underground single called “Replacement Girl”. The music video for the song was the first video from an unsigned Canadian rapper to be featured on BET. One version of the song featured a spliced sample of the song “Man of the Year” by Brisco, Flo Rida and Lil Wayne.

Houston-based producer and Rap-A-Lot Records founder, Jas Prince, heard the single and passed it on to Lil Wayne. Lil Wayne was impressed and called Drake, inviting him to fly to Houston to join his Tha Carter III tour. As the tour progressed, Drake and Wayne wrote and recorded several songs including “Brand New”, “Forever” and “Ransom”.

Young Money Entertainment: Despite what you may assume, Drake had not signed onto Wayne’s record label at this point. He released a third mixtape, “So Far Gone”, in 2009. He released the mixtape as a free download on his OVO website. The mixtape featured appearances from Lil Wayne, Lloyd, Trey Songz, Omarian and Bun B. After being downloaded 2000 times in its first hour, the mixtape was eventually certified Gold by the RIAA, peaking at #2 on the Billboard Hot 100. The mixtape was eventually released as an EP which debuted at #6 on the Billboard 200 and won the 2010 Juno Award for Rap Recording of the Year.

Still an independent artist, Drake was now in high demand within the music industry. A bidding war resulted with various labels scrambling to sign him. The desperation has been described as “the biggest bidding war in music history”, though that’s not confirmed.

Every album since has been at least 4-times Platinum.

Drake is  one of the most successful and powerful forces in hip-hop and the music industry at large. He has worked with dozens of the biggest stars in the music industry including Kanye West, Eminem, Jay-Z and Travis Scott. Drake has been nominated for countless awards. As of this writing he has won more than 180 major awards including four Grammys from more than 40 nominations.

Singles Sold: Drake has sold more digital singles than any artist in history. As of this writing he has sold more than 163 million digital singles. That’s 40 million more than the second place person, Rihanna. In terms of album sales, is the 80th highest selling musician of all time with an estimated 26 million albums sold. That makes him the third best-selling Canadian musician of all time behind Shania Twain (48 million) and Celine Dion (50 million). 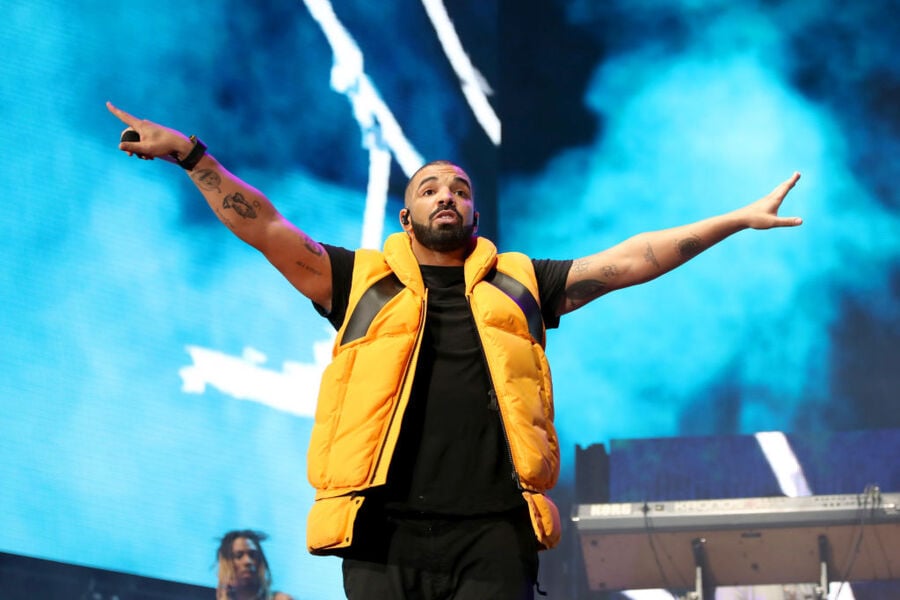 Real Estate: Though he was born in Canada, Drake has called Hidden Hills, California home since 2012 when he bought a palatial mansion from the former owner of Los Angeles’ Saddle Ranch Bar for $7.7 million in cash. Nicknamed the YOLO Estate, the property features multiple residences including a 12,000 square-foot main house and a 2,000 square foot party house. The estate features equestrian stables, 25-person movie theater, a full-sized basketball court, sand volleyball court and one of the largest privately-owned pools in Southern California. His lagoon-like pool, which loops around the exterior of the house, features with several waterfalls, a swim-up bar an 80-foot water slide and Playboy-mansion style grotto. In a Rolling Stone interview Drake explained that he had his eye on this mansion for years after Googling “craziest residential swimming pools” and seeing this as one of the results. For motivation, he used a photo of the pool as the background image on his computer for years. The former owner listed the house in 2009 for $27 million. By 2012 the former owner was experiencing a cash crunch so Drake swooped in and bought it for $7.7 million.

In 2015 he extended his property by buying the neighboring 1.6 acre estate for $2.8 million. In 2018 he extended the property again when he spent $4.5 million to buy yet another neighboring house. His private estate now encompasses 6.7-acres of contiguous property at the end of a cul-de-sac that represent $15 million in real estate acquisition costs alone.

In 2016 Drake spent $6.7 million to buy a plot of land in suburban Toronto where he intends to build a 35,000 square foot chateau-style mansion. He also owns a condo in downtown Toronto.

In total, Drake owns at least $25 million worth of real estate. His real estate assets (especially the Hidden Hills compound) are likely worth much more when his improvements are included. It’s possible that the Hidden Hills compound now would fetch $20-30 million on its own. For comparison, a 2-acre estate in the same community was listed for $15.5 million in May 2019.

Private Jet: In May 2019 Drake released a video on Instagram that revealed his newly-acquired Boeing 767 private jet which he has dubbed (and painted) “Air Drake”. According to the video, Drake is proud to own the jet free and clear, proclaiming that it’s all his with “no rental, no timeshare, no co-owners.” A similar model and quality private jet would be worth $75 – $100 million.

Business Ventures: Over the years Drake has endorsed many major brands including most notably, Sprite, Burger King, Whataburger, Nike and Apple. When Apple Music launched, Drake signed a $19 million exclusivity deal. This deal allowed Apple to be the exclusive initial home of all of Drake’s future solo releases.

In 2012 Drake formed his own record label, OVO Sound, which is distributed by Warner Bros. Records. In addition to Drake, today OVO Sound reps music for artists such as PartyNextDoor, Majid Jordan, Kash Doll and producers such as Boi-1da, Future the Prince, Mike Zombie and more.

He is the “global ambassador” of the Toronto Raptors and hosts an annual Drake Night with the team.

In 2016 Drake launched his own brand of bourbon-based whiskey called Virginia Black. The company sold 4,000 bottles in the first week after launching. Later in the year the company shipped an additional 30,000 units.

Tours: Drake’s first headline tour was 2010’s “Away From Home Tour”. He embarked on five additional headlining tours through 2019. He has also co-headlined four tours including his 2018 tour with the rap group Migos.

Every summer Drake puts on a festival in Toronto called “OVO Fest” that sells out instantly.

Drake has an ongoing residency at the XS Nightclub in Las Vegas that can easily earn him $500,000 for a single appearance. He now earns more than $2 million for a more formal concert.

Personal Life: Drake has had a number of high profile relationships over the years. He dated Rihanna on and off between 2009 and 2016. He would later describe Rihana as “the woman I’ve been in love with since I was 22 years old.”

In October 2017 a french model/actress/artist named Sophie Brussaux gave birth to his son Adonis. Drake did not confirm his fatherhood until 2018.