Brock Lesnar Net Worth: Brock Lesnar is an American professional wrestler and former Mixed Martial Artist who has a net worth of $25 million. Although he has experienced some success in both professional football and the UFC, Brock is probably best known for his time in the WWE, where he became the overall world champion eight times. Lesnar began as an amateur wrestler before joining the WWE (formerly the WWF) in 2000. Shortly thereafter, he became the youngest champion in the title’s history.

After leaving the WWE in 2004, Brock successfully joined the Minnesota Vikings as a defensive tackle, but he was cut before the start of the season. He then spent time in Japan as a professional wrestler before beginning a career in Mixed Martial Arts. His journey with the UFC began in 2007, and he performed well throughout the next few years despite injuries. Eventually, Brock became the undisputed Heavyweight Champion, and he succeeded in bringing the UFC some of its most commercially successful pay-per-view events in history.

After another return to the WWE, Lesnar returned to the UFC once again, only to be suspended for using a banned substance. This prompted him to retire for a second and final time in 2017. As of 2020, Brock is the only person to simultaneously hold a UFC championship and a WWE world championship. He has been called one of the most accomplished wrestlers in history, and many fans have praised him for his ability to entertain while in the ring.

Early Life: Brock Edward Lesnar was born on July 12th of 1977 in Webster, South Dakota. Brock was raised alongside three siblings on a dairy farm in a family with German and Polish heritage. During his high school years, he joined the football and wrestling teams. He eventually placed third in the state championships during his senior year at high school. At age 17, Lesnar joined the Army National Guard and was subsequently reassigned to a desk job after his colorblindness was discovered. He then failed a computer typing test and was discharged. 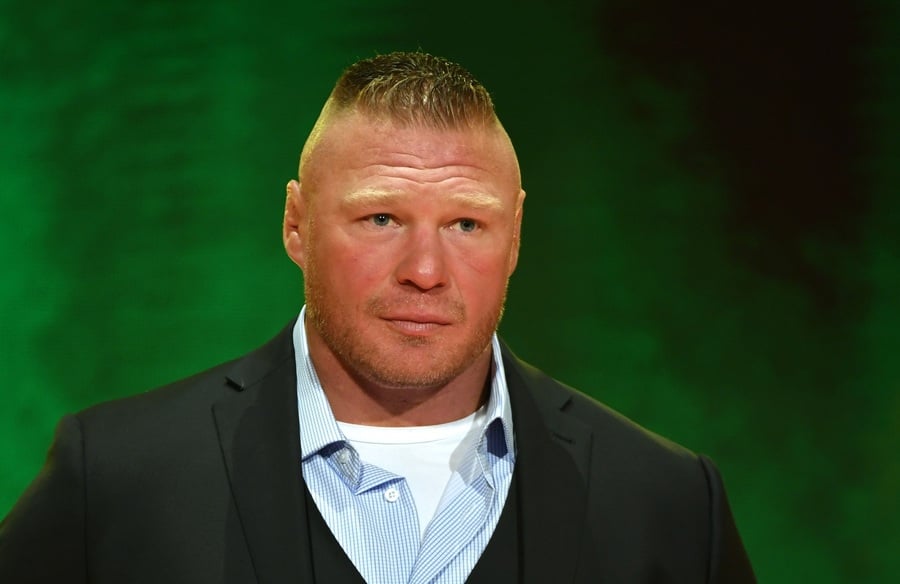 Career: Brock started his professional wrestling career in 2000, signing with the WWF. He was then sent to Ohio Valley Wrestling (OVW) before being called up to WWF’s main roster in 2002. After his WWF debut, Brock was quickly drafted into the “Raw” brand. During his early years at the WWF, Lesnar was famous for his feud with The Undertaker. He later developed a rivalry with John Cena.

During this period, he made his UFC debut in 2008. He would continue to compete in the UFC until 2011, and he eventually became the UFC Heavyweight Champion. He lost his title in 2010 to Cain Velasquez. At this point, Lesnar was one of the highest-paid UFC performers with a salary and bonuses totaling $5.3 million.

After returning to the WWE, another feud developed with Goldberg. Not long after, Brock departed from the WWE for the first time. During his time with the WWE, Lesnar won many championships.

He then relocated to Japan and won the IWGP Heavyweight Championship. He defended this championship despite contact issues with the WWE until 2012. At this point, Brock returned to the WWE and vowed to bring legitimacy back to the organization.

He had another spell in the UFC from 2016 to 2018, which ended in suspension and retirement after he used a banned substance. In 2014, he became the WWE World Heavyweight champion. This string of strong performances continued until 2020 when it was announced that Lesnar was no longer under contract with the WWE.

Relationships: Brock was initially engaged to a woman named Nicole McClain, and they had twins together before ending their relationship. In 2006, Brock Lesnar married another WWE performer named Sable. Her real name is Rena Greek. Over the course of their relationship, they have had two children together. Lesnar is also the stepfather of Greek’s child from a former marriage. The family currently resides in Maryfield, Saskatchewan, and Brock is famously reluctant to reveal any details about his family or private life.

Another legal issue came when he challenged WWE’s non-compete clause in court. This part of his contract specifically stated that Brock could not work for any other professional wrestling companies for a set period of time after leaving the WWE. Lesnar appeared to breach his contract when he appeared at a New Japan Pro-Wrestling show in 2004.

Eventually, both sides decided against legal action and took steps to renew Brock’s contract – although Lesnar then walked away. In 2006, a judge stated that he was going to take Brock’s side in the matter, and this caused both parties to reach a settlement. Brock’s case was dropped as a result.

In 2011, Lesnar was fined $1,725 after “improperly tagging an animal” while on a hunting trip to Alberta. He was actually charged with three separate infractions, but Brock only pleaded guilty to the improper tagging charge. The other two were dropped. Lesnar was suspended from hunting for six months as a result.

Real Estate: In 2014, it was reported that Brock Lesnar had sold his rural estate outside of Minneapolis for $750,000. Spanning 43 acres sprinkled with trees, the property includes a main residence, two barns, and a pond. The home itself features 3,247 square feet of living space. Brock had originally paid $783,500 for the property back in 2003. This means that he sold his property at a notable loss, despite the fact that he tried to sell it for as much as $849,000 in earlier attempts.